No more worries about iPhone SE / 5s / 5! Easy scaling down with Viewport Extra Hello. I am Tsuchi, a front-end engineer.

However, this often causes problems with 320px wide devices.
For example, unintended line breaks may occur in the heading, or side-by-side elements may protrude from the frame.
Increasing breakpoints to solve them is tedious because it increases the style.
There are fewer users of 320px wide devices than before, but they still exist.

We want to solve this somehow.
So I made it!

Viewport Extra enables you to set minimum and maximum widths for viewport by rewriting the meta tag.

For example, if the minimum width is set to 375px, the iPhone SE (320px width device) will scale the appearance on the 375px width device down to about 85.3% and display.

It fits the screen perfectly and no extra horizontal scrolling occurs, because the initial-scale value of the meta[name=”viewport”] tag is rewritten at the same time.

It’s very easy to use.

It is important to place a script tag just after the meta tag.
This will apply the scaling immediately and will prevent scaling down or up after HTML rendering.

Here is a comparison of the page optimized for a 375px device with and without Viewport Extra applied.
Reproduce 320px wide device using browser developer tool.
HTML and CSS are following (not including the script tags). 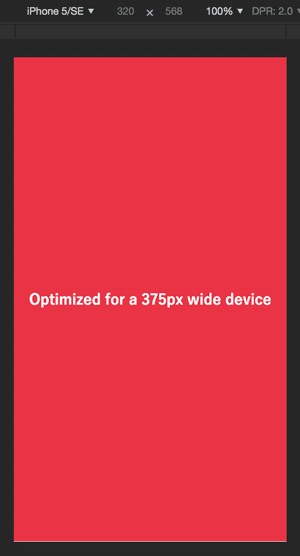 It fits the screen perfectly!

Viewport Extra will surely help you, until the share of small devices is further reduced or restored again.
Try it out! Thank you.